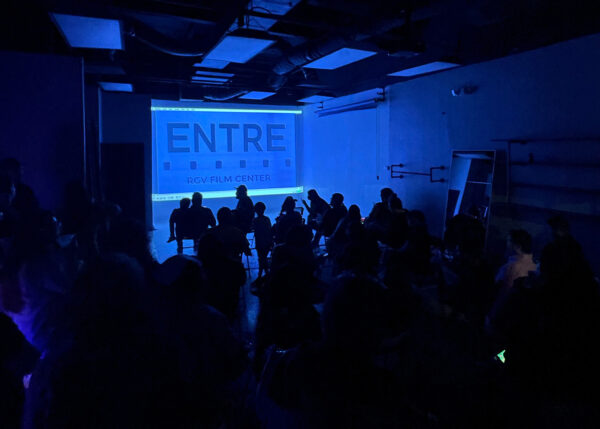 At Common Space in McAllen, Texas, a packed crowd of curious onlookers is waiting in anticipation. They are there to see the premiere of four documentaries by filmmakers from the Rio Grande Valley. It’s standing room only, and at the back of the space Andres Sanchez and C. Diaz are working out last-minute technical difficulties. The duo are the founders of ENTRE, a community film center that focuses on the creation, exhibition, and preservation of community-made cinema. Tonight’s screening is the culmination of an 8-week documentary intensive hosted by ENTRE, with the participation of a group of first-time filmmakers. But before the audience is able to watch the films, a faulty sound system must be replaced. Scanning the crowd, I notice Sanchez hurriedly approaching the stage carting a small mountain of equipment. Offering to help, I find myself wrestling with a tangled mess of cables as we install a new set of speakers. “Doesn’t this remind you of something?,” Sanchez asks, as we adjust levels on a sound mixer.

My earliest recollections of Sanchez date back to 2011, when his band, Jungle Bodies, opened for Austin rock band The Strange Boys at Ambrosia Coffee Shop in McAllen. I had just returned to the Rio Grande Valley after a stint of living in Austin, and found the concert revelatory. The opportunity to experience a vibrant creative community that I had sought in Austin was presenting itself in my hometown. Eventually, I would go on to join Jungle Bodies, recording music and performing with them from 2012-2014. Traveling for concerts throughout Texas with a van full of equipment, we untangled our fair share of cables and had plenty of experience setting up sound systems.

While I eventually moved away from McAllen a second time, Sanchez continued to maintain a deep involvement with the creative community in the Rio Grande Valley — managing a popular blog, working in video production at South Texas College, and creating a publishing company called Universal Punk, with the intention of exposing local musicians, artists, and writers to a wider audience. 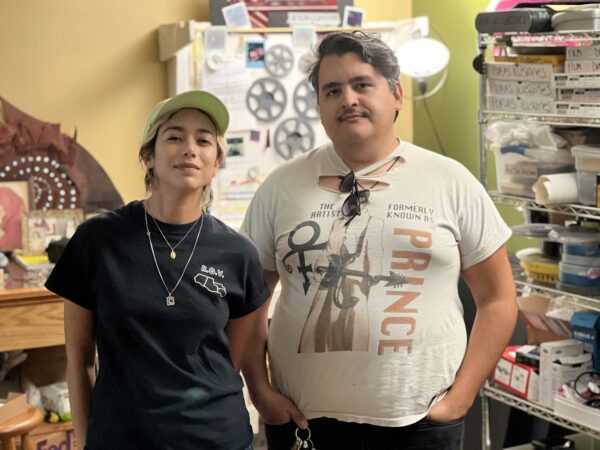 Unaware of Sanchez’s work at the time, C. Diaz was forging a parallel creative path. After studying Radio-Television-Film at the University of Texas at Austin, Diaz moved to New York and freelanced as a film editor. A pivotal moment came while attending a direct animation workshop at Mono No Aware, a nonprofit artist-run film lab in New York City. The experience led to a shift in focus to analog filmmaking, and soon after, a job opportunity in Los Angeles scanning 16mm prints for projects including Kelly Reichardt’s Certain Women and Beyoncé’s Lemonade.

While in Los Angeles, Diaz was selected for a residency at the Echo Park Film Center and became more involved with the organization’s activities, teaching workshops on color correction and regularly attending film screenings. Visits home to family in the Rio Grande Valley would regularly include exhibitions of video art and seminars on experimental film history at the McAllen Creative Incubator. During one such visit in 2017, Diaz endeavored on the production of a feature film set in the Rio Grande Valley, and connected with Sanchez while recruiting locals for the crew. The two hit it off, staying in touch after work on the film had been completed, and found themselves discussing ways they could breathe more life into the South Texas film community.

These discussions were still in the early stages when a fortuitous opportunity presented itself. Natalia Rocafuerte, a video artist from the Rio Grande Valley, invited Diaz and Sanchez to curate a media festival she was organizing. Miraaa Media Fest had recently received funding from the NALAC Arts Border Narrative Grant, and Rocafuerte was looking to expand the scope of the project. Taking place in August 2021, the festival brought together more than 25 regional artists working in a variety of mediums, including painting, installation, VR, sound design, and film. With several hundred attendees, the success of the festival served as a catalyst for the formation of ENTRE, priming the community for a permanent film center designed to encourage creative collaboration with an emphasis on the unique culture of South Texas.

I was living in North Texas when I learned Miraaa was taking place in McAllen, and decided to make the trek south to experience it for myself. Attending the event’s opening reception at the Creative Incubator, I was not surprised to discover that Sanchez was involved in curating the series of locally produced films. Though ENTRE was still in its infancy, I began to follow its progress and soon learned that the organization was the recipient of a $20,000 award from the Interchange Artist Grant program. This led to the establishment of an office space in downtown McAllen, and a series of workshops, film screenings, and other community events soon followed. 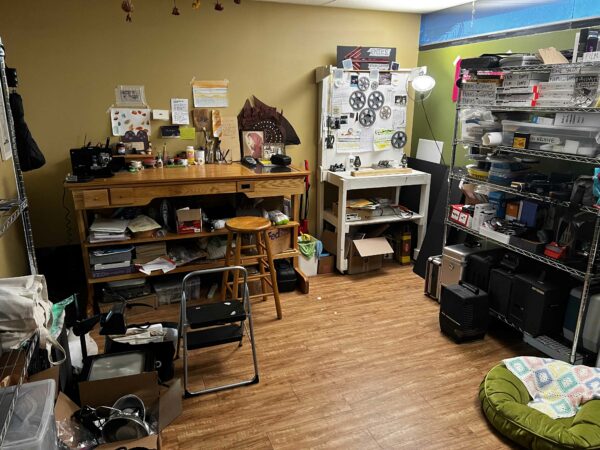 When I contacted ENTRE to request an interview for this article, Diaz and Sanchez were preparing to travel to Kansas City for a meeting of the 2021 Interchange Artist Grant recipients. ENTRE was scheduled to give a presentation on their use of grant funds throughout 2021 on their programming, and to establish a community home-movie archival project. It was clear they had been busy, and after spending a weekend in Kansas City sharing success stories with other grant recipients, including AgroArt farmers and an organization dedicated to preserving indigenous languages through song, ENTRE returned to South Texas revitalized and ready to begin work on its next project, an 8-week documentary intensive.

Four teams of filmmakers signed up, and when I visited ENTRE’s headquarters during the intensives midpoint to observe an editing workshop, I learned more about the films being made. From highlighting thrift store fashion to raising awareness about a local nature center, the filmmakers were focused on a wide variety of topics. In one corner of the ENTRE office space, Abigail Vela was editing a film that explored practices for everyday living that encourage sustainability and environmental preservation. “I don’t see a lot of people talking about sustainability from our culture,” Vela says. “A lot of the YouTubers, they’re not Mexican. They don’t come from low-income communities.” 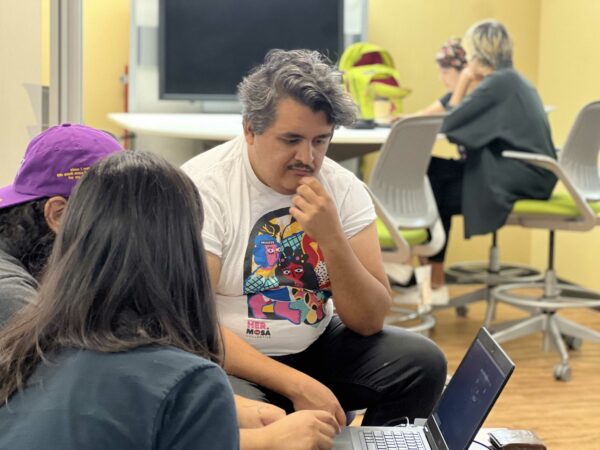 While ENTRE’s provision of equipment, including cameras, lights, microphones, and laptops, was important to the filmmakers, participant Sam Chapa explained that it wasn’t the most valuable part of the experience. “The fact that [Diaz and Sanchez] are here, that they’re available at a text or a call, has made this experience a lot less daunting.” Each of the filmmakers I spoke with expressed similar sentiments, and it was clear that a sense of accessibility and support was central to the environment ENTRE had created.

Fast forward several weeks, and the intensive participants are all present at Common Space for the premiere of their films. Many from the community, including family, friends, and some of the films’ subjects, are also in attendance. The technical difficulties have all been resolved and you can sense an air of excitement as Sanchez announces that the screening will begin. For the next 45 minutes, the room is filled with emotion as images of familiar faces and places are shown. After the screening, Diaz and Sanchez join the filmmakers for a Q&A with the audience. A young girl’s hand is raised as she rises from her seat in the crowd, “I cried, I laughed, and I want to know — When is the next intensive?” 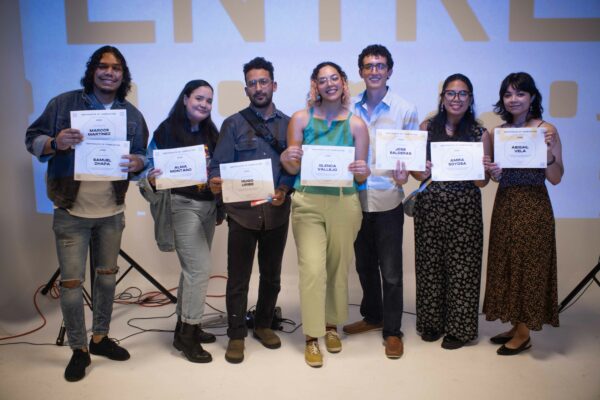 The films produced during the ENTRE documentary intensive can be viewed here. Learn more about ENTRE’s schedule of events and workshops at entrefilmcenter.org.